Remember Mahesh Babu had posted a picture with wife Namrata Shirodkar and Microsoft co-founder Bill Gates a couple of days ago? Well, on Thursday, Bill Gates re-posted Mahesh Babu’s picture on his Twitter and Facebook profiles and he captioned the post: “Being in New York is always fun – you never know who you’ll run into. It was great meeting you and Namrata.” The billionaire also shared a picture with the couple on his Instagram story and he wrote: “Great minds eat alike. I enjoyed meeting you and Namrata.”

Bill Gates reposted Mahesh Babu’s tweet and he wrote this :

Being in New York is always fun – you never know who you’ll run into. It was great meeting you and Namrata! https://t.co/qBykgcXDS6

Here’s what Bill Gates posted on his Instagram story: 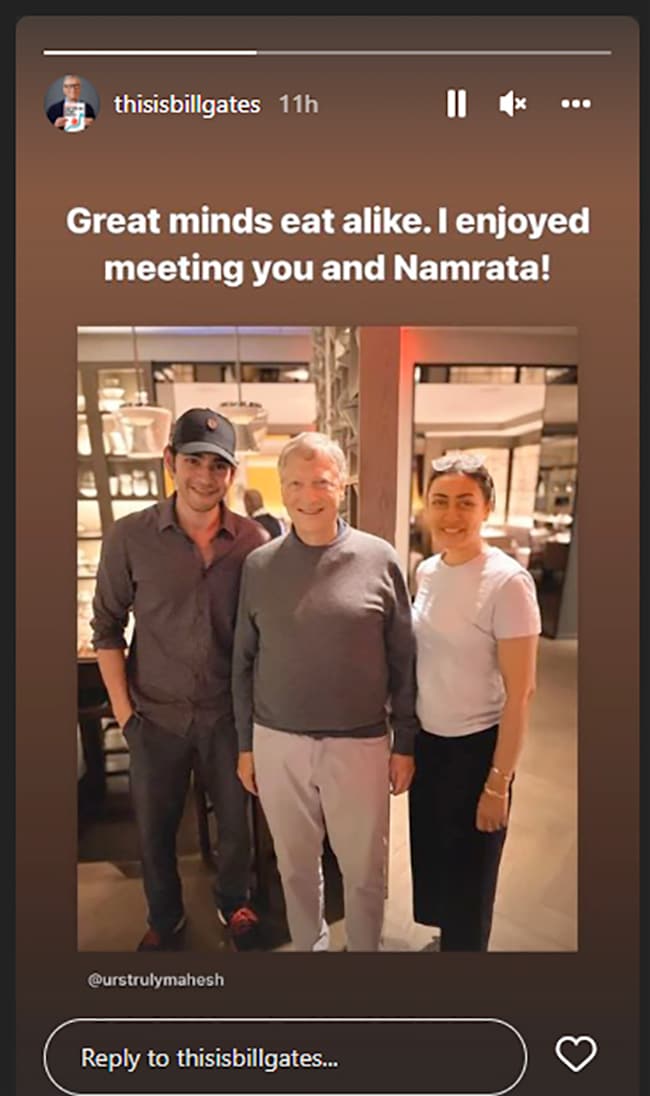 Mahesh Babu, son of Telugu actor Krishna, started his career as a child artiste with 1989 film Poratam, featuring his father. He also starred in his father’s films Sankharavam and Bazaar Rowdy among others. Mahesh Babu made his full-fledged silver screen debut with 1999 film Raja Kumarudu opposite Preity Zinta.

He went on to feature films like Athadu, Pokiri, Athidhi, Dookudu, SPYder, Bharat Ane Nenu and Maharshi, to name a few. He was last seen in Sarileru Neekevvaru. He also starred in Sarkaru Vaari Paata

Namrata Shirodkar, who was Miss India 1993, is best-known for her performances in Hindi movies like Kachche Dhaage, Pukar, Astitva, Albela and Dil Vil Pyar Vyar. She has also featured in Kannada, Telugu and Malayalam films. She also starred in 2004’s Bride And Prejudice. She is married to Telugu superstar Mahesh Babu, whom she met while filming 2000 film Vamsi and the couple are parents to a son named Gautham and daughter Sitara.

The government last year gave a $6 billion contract to state-owned Hindustan Aeronautics Ltd for 83 of the locally produced...

The child died on the spot, the police said. The horrific incident happened at an apartment in north Bengaluru's SR...

In a complaint, the health worker said she along with some Asha and Anganwadi workers had administered a vaccine jab...

The Income Tax department said, one of the groups was maintaining a parallel set of books of account, indicating "systematic...

Sanjay Chhabria and Avinash Bhosale were earlier arrested in the Yes Bank-DHFL case that caused an alleged loss of over ₹ 34,000...