KYIV, Feb 25 (Reuters) – Ukrainian President Volodymyr Zelenskiy vowed on Friday to stay in Kyiv as his troops battled Russian invaders advancing toward the capital in the biggest attack on a European state since World War Two.

Russia launched its invasion by land, air and sea on Thursday following a declaration of war by President Vladimir Putin. An estimated 100,000 people fled as explosions and gunfire rocked major cities. Dozens have been reported killed.

U.S. and Ukrainian officials say Russia aims to capture Kyiv and topple the government, which Putin regards as a puppet of the United States. Russian troops seized the Chernobyl former nuclear power plant north of Kyiv as they advanced along the shortest route to Kyiv from Belarus to the north.

“(The) enemy has marked me down as the number one target,” Zelenskiy warned in a video message as heavy fighting was reported on multiple fronts. “My family is the number two target. They want to destroy Ukraine politically by destroying the head of state.”

“I will stay in the capital. My family is also in Ukraine.”

Putin says Russia is carrying out “a special military operation” to stop the Ukrainian government from committing genocide against its own people – an accusation the West calls baseless. He also says Ukraine is an illegitimate state whose lands historically belong to Russia.

Asked if he was worried about Zelenskiy’s safety, U.S. Secretary of State Antony Blinken told CBS: “To the best of my knowledge, President Zelenskiy remains in Ukraine at his post, and of course we’re concerned for the safety of all of our friends in Ukraine – government officials and others.”

A democratic nation of 44 million people, Ukraine voted for independence at the fall of the Soviet Union and has recently stepped up efforts to join the NATO military alliance and the European Union, aspirations that infuriate Moscow.

The United States, Britain, Japan, Canada, Australia and the EU unveiled more sanctions on Moscow on top of penalties earlier this week, including a move by Germany to halt an $11 billion gas pipeline from Russia.

EU foreign policy chief Josep Borrell described the bloc’s measures as “the harshest package of sanctions we have ever implemented”.

China came under pressure over its refusal to call Russia’s assault an invasion.

U.S. President Joe Biden, speaking to reporters at the White House, said: “Any nation that countenances Russia’s naked aggression against Ukraine will be stained by association.” He declined to comment directly on China’s position. 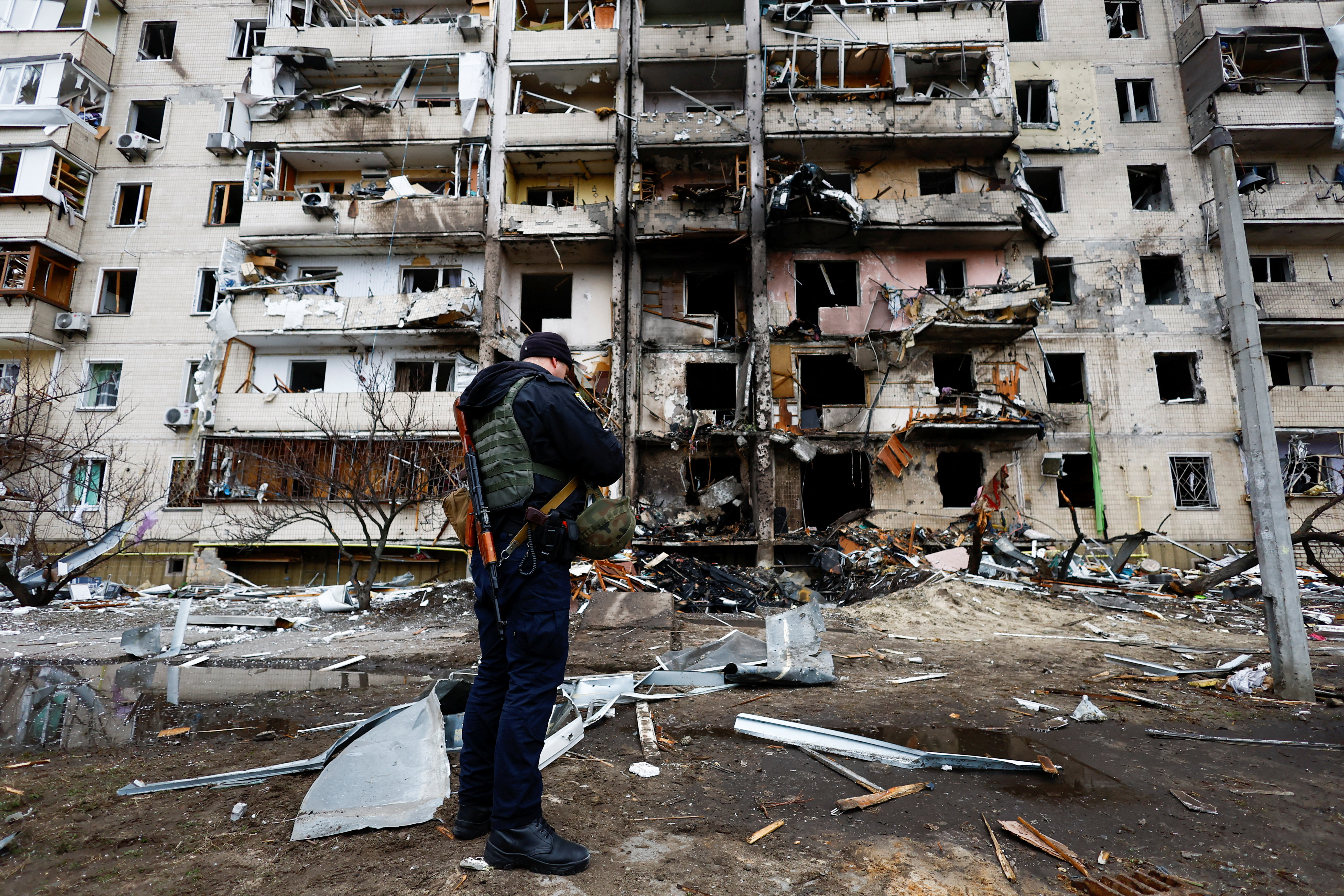 Russia is one of the world’s biggest energy producers, and both it and Ukraine are among the top exporters of grain. War and sanctions will disrupt economies around the world.

Oil prices soared as much as $2 per barrel on Friday as markets brace for the impact of trade sanctions on major crude exporter Russia.

U.S. wheat futures hit their highest in nearly 14 years, corn hovered near an eight-month peak and soybeans rebounded on fears of grain supply disruptions from the key Black Sea region.

Zelenskiy said 137 military personnel and civilians had been killed in the fighting, with hundreds wounded. Ukrainian officials had earlier reported at least 70 people killed.

Ukrainian forces downed an aircraft over Kyiv early on Friday, which then crashed into a residential building and set it on fire, said Anton Herashchenko, an adviser to the interior minister. It was unclear if the aircraft was manned.

A missile hit a Ukrainian border post in the southeastern region of Zaporizhzhya, killing and wounding some guards, the border guard service said.

The United States and other NATO members have sent military aid to Ukraine but there is no move to send troops for fear of sparking a wider European conflict.

Some 90 km (60 miles) north of Kyiv, Chernobyl was taken over by forces without identifying marks who disarmed a Ukrainian military unit guarding the station, Ukraine’s state nuclear regulator said.

It said there had been no casualties, that nothing had been destroyed and that radiation levels were unchanged. It informed the International Atomic Energy Agency that it had lost control of the plant.

The U.N. Security Council will vote on Friday on a draft resolution that would condemn Russia’s invasion and require Moscow’s immediate withdrawal.

However, Moscow can veto the measure, and it was unclear how China would vote.

Previous post Ukraine and Russia: What you need to know right now

Trump vs FBI: The statement was released shortly after Attorney General Merrick Garland said he himself had approved the unprecedented...

Republican governor of Texas, Greg Abbott, has been sending migrants to Washington for months and recently began pushing them to...

The Federal Bureau of Investigation said a person armed with a weapon had tried to "breach" the entry to the...

"This morning officers neutralised a threatening individual in possession of a knife at the Roissy-Charles de Gaulle airport," Paris police...

The Greek coastguard is searching for the missing following the shipwreck which happened after the boat left Turkey. Athens:  Around...

Rescuers had overnight winched the male out of the River Seine for transfer to a saltwater pen, in a delicate...