Hazaras, popularly believed to descend from the 13th-century warrior Genghis Khan and his Mongol troops, account for 15 per cent of Afghanistan’s 38m population, according to officials, though some Shia put the figure higher. The ethnic group faced intense persecution during Afghanistan’s previous rule by the Taliban, ethnic Pashtuns and hardline Sunnis who do not consider Shia to be true Muslims.

But the outreach video released in April on al-Emarah, the Taliban’s news agency, made no mention of this bloody history. Instead, Shia cleric Mawlawi Mahdi Mujahid, a rare Hazara Taliban member, urged his co-religionists to join the struggle against “invaders led by America”.

The call was part of a broad campaign intended to reassure skittish Afghan Shias, as well as neighbouring Iran, a Shia theocracy, that they had no reason to fear a Taliban return to power as the group sought to secure international legitimacy.

Yet with the Taliban now forming the government, most Shia are anxious about their prospects, sceptical about the Taliban’s promise of tolerance.

“The Taliban want to portray themselves as leaders of the entire Afghanistan — not just Sunnis, but also Shia,” said Said Sabir Ibrahimi, a non-resident fellow at New York University’s Centre for International Cooperation.

“They have been telling the world, ‘We are not against the Shia, they are welcome to live in Afghanistan, they are our compatriots’,” Ibrahimi said. “The reality is that the Shia are scared of the Taliban and cannot trust them. If your theology is against the Shia existence, you are going to systematically discriminate against Shia when you are in power.”

‘Soldiers get carried away’

A Pakistan-based Shia cleric told the Financial Times the Taliban were “giving all the right messages and telling Shia of Afghanistan that they mean no harm to us. The problem is down the line, their [Taliban] soldiers get carried away.”

Hostilities between Afghanistan’s dominant Pashtun community, which makes up about 40 per cent of the population, and Hazaras go back to the 19th century, when a Pashtun king ordered the killing and enslavement of Hazaras for revolting against his rule.

During the Taliban’s previous regime from 1996 to 2001, human rights groups documented three large-scale massacres of Hazara civilians, including in 1998 in Mazar-i-Sharif, where Human Rights Watch said scores if not hundreds of men were summarily executed.

Violent attacks against Hazaras continued even after the Taliban were dislodged from Kabul, with travellers between Hazara-dominated Bamiyan and Kabul often pulled from buses and killed. Hazaras were also targeted in a string of attacks blamed on radical Islamist forces.

But as the US withdrawal approached, Taliban leaders sought to reassure Shia at home and abroad that the militant group had changed. In July, Taliban leaders visited Tehran, where analysts and regional officials said the Iranian government extracted promises of safety for Shia and ethnic minority Tajiks.

“If the Taliban starts killing Shia, it will lead to a civil war and Iran will have no other choice but to get involved in an unwanted conflict,” said a professor of international relations in Tehran.

Shia held religious ceremonies for Ashura — a day of mourning that commemorates the death of the Prophet Mohammed’s grandson — unhindered last week, with some Taliban fighters even visiting Shia mosques in what was portrayed as a gesture of solidarity.

But many Shia remained apprehensive, fearing the Taliban’s claims of tolerance were a tactical manoeuvre to secure international recognition, and would quickly fade once they consolidated their hold over the country.

“The Taliban’s anti-Shia hatred is deep-rooted, which cannot disappear overnight,” said Javad, a young Shia Hazara from Bamiyan. “They have been educated in Pakistani schools and believe Shia are infidels who must be killed.”

He also warned that renewed civil war would be inevitable if the Taliban’s promises of tolerance were not honoured. “Shia will not accept the Taliban’s unjust ruling and bullying,” he said.

Anxiety has been further stoked by reports of atrocities against Hazara civilians as the Taliban pressed their offensive this summer, including after an assault on Ghazni. Amnesty International last week accused Taliban fighters of massacring nine ethnic Hazara men in July following the battle for the city.

A 27-year-old Shia Hazara construction engineer from Herat who fled to Iran shortly before the Taliban takeover said the Islamist group failed to honour many of its past commitments, including pledges not to persecute Shia and not to kill Iranian diplomats in Mazar-i-Sharif in 1998.

It was hard to know how Shia in remote provinces were faring due to the lack of journalists to report about conditions on the ground, he added. 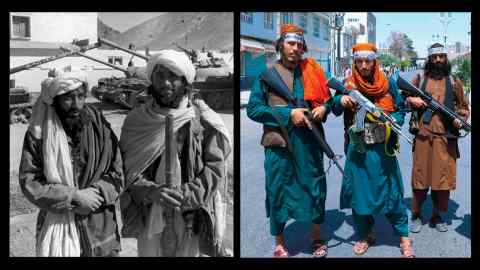 “There is no record that the Taliban can hold on to their promises,” he said. “Very difficult days for Shia lie ahead.”

Analysts also said that Taliban leaders could struggle to ensure their ground forces adhered to promises to not persecute religious and ethnic minorities that long been reviled by the group.

“Even if you provide all these assurances you are going to be kind and treat them as equals, its really hard for it to materialise,” Ibrahimi said. “It’s not even a question of trust. I don’t know if they have the ability to fulfil these promises.”

A Pakistani official concurred. “They are not an organised army,” the official said. “Some of the foot soldiers are in danger of doing things that their leaders ordered in the 90s, without realising that the thinking of the [Taliban] leadership has changed.”